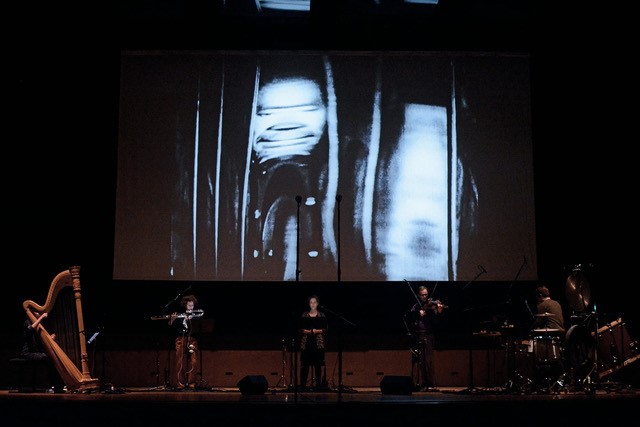 A Page of Madness is Revue Blanche’s third multimedia project commissioned by Muziekcentrum De Bijloke. Once again, the socio-cultural context of the magazine ‘La Revue Blanche’ was the ensemble’s inspiration. Exoticism and Kawabata’s serene writings in particular, are at the heart of this programme. In the avant garde movie ‘A page of Madness’ from 1926 (with a screenplay by Kawabata), Japanese cinematographer Kinugasa paints the subjective observations of people living in a runaway asylum. Thought lost for almost half a century, the film was rereleased in 1971 and became a cult hit. The film was originally accompanied by live music and a narrator or “benshi”, who is now replaced by a new soundtrack by composer Daan Janssens. The audience is invited to enter a spherical, colourful and at times alienating universe of sound. The musicians’s instruments are amplified and electronically manipulated while on stage. Surrounded by speakers, listeners are fully immersed in the expressionist images of this silent arthouse film.